The LAMA state committee unanimously passed the following resolution to disaffiliate from the Libertarian National Committee on June 5, 2022:

MANCHESTER, NH, May 17, 2022 – The Libertarian Policy Institute announces today that they have secured Edward Snowden as a featured speaker for the Libertarian National Convention later this month.
Read more
posted by Libertarian Party of Massachusetts | 893.80fp
May 17, 2022
1 comment Share

Libertarian Candidates in the News

Libertarian Gubernatorial candidate Keven Reed joined Libertarian Representative candidate Charlie Larkin this past weekend in western Massachusetts to collect signatures to get on the ballot.

Both candidates made the Athol Daily News 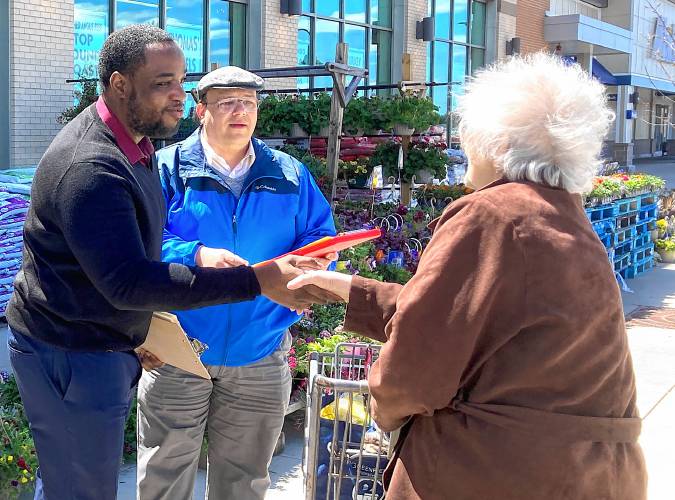 The convention will be held at the Nugget Casino Resort in Reno, Nevada on May 26-29th. Please see the LNC website for more information.

Greetings Libertarians of Massachusetts! The Libertarian Association of Massachusetts held its annual state convention this past Saturday, April 23rd at the Sheraton in Framingham. I am pleased to announce that the members elected the following people to the State Committee for the 2022-23 term:
We would like to thank the members who attended the convention to deliberate proposed changes to the bylaws, and to elect their State Committee and their delegates for the upcoming LNC Convention in Reno next month. The members also endorsed the state office candidates that will be representing the Libertarian Party of Massachusetts this fall.
This is exciting news since the last state wide candidate we ran was for Auditor in 2018. State wide campaigns provide opportunities to share our platform with others here in the Commonwealth. I look forward to working with the State Committee and with the members to advance liberty by returning to our core activities such as political recruiting, outreach, and activism.
In Liberty,
Don Graham
LAMA Chair
posted by Libertarian Party of Massachusetts | 893.80fp
April 26, 2022
1 comment Share

Kevin Reed, Libertarian entrepreneur, has formed an exploratory committee for a possible run for Governor. He announced last week that he will be transporting delegates to the state convention as "an act of defiance against subversive attacks to state parties throughout the country." Read his statement:

This is the Year to Run for Office!

Massachusetts - and America as a whole - needs change! The People are tired of the expansion of government control into every aspect of life. This is a unique opportunity for Libertarians to spread our message and create momentum for actual change. In addition, as this year Libertarians don’t have major party status in Massachusetts, signature collection is easier than usual.

From a recent Facebook post by Tyler Harris, Executive Director of the National LP:
There is absolutely no reason that anyone — inside the Libertarian movement or outside of it — should carry water for Putin’s authoritarian regime as it wages a senseless and needless war of aggression in Ukraine. Those apologists eager to ape Putin’s propaganda, to blame Ukraine or NATO or the United States for this invasion, wittingly or unwittingly undermine not only the heroic efforts of Ukrainians to defend themselves and their homes from Russia’s aggression, but the efforts of thousands of Russian protestors and demonstrators, including Libertarians within Russia, who are risking their lives and livelihoods by demanding an end to the invasion.
Read more
posted by Cristina Crawford | 571.60fp
March 06, 2022
1 comment Share

How We Got Here

Note: A version of this article was originally written for the LNC meeting scheduled Feb. 6, 2022 inquiring about the status of LAMA (the Libertarian Association of Massachusetts – the legally-recognized Massachusetts state affiliate for the Libertarian Party). Portions of it were also read at the LAMA meeting on Feb. 7, 2022. It has now been edited to remove details specific to that meeting and to add developments since then.