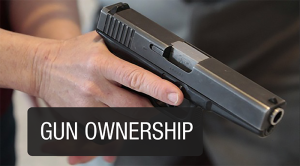 The Libertarian Party - the party of principle - is the only political party that unequivocally supports the second amendment in Massachusetts. We believe that individuals have an inherent right to possess  firearms, and that the restrictive laws of Massachusetts are an unjust burden and infringement of that right.

We believe that gun control proponents are misinformed and misguided in their attempts to prevent gun ownership in Massachusetts under the guise of public safety. Arbitrary limits such as magazine capacities restricted to 10 bullets and prohibition of cosmetic features such as rifle bayonet mounts do not make the public any safer. We believe that the "may issue" licensing requirement which varies from town to town prevent many law-abiding citizens from exercising a Constitutional right.

Libertarians support the repeal of firearm storage, licensing & permit, & assault weapons ban laws in Massachusetts. We oppose any attempt to maintain or add to the existing firearms laws, regulations, and mandates.

Libertarians believe that every person has the right to arm themselves in self-defense.