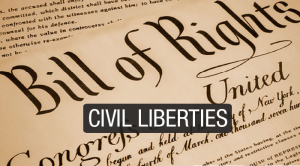 The Libertarian Association of Massachusetts's platform on civil liberties is "Libertarians stand for protecting your Federal and State Constitutional Rights, all of them without any exception or omission. There is no National Security exemption to the Bill of Rights. Politicians who ignore our Constitutional Liberties are the chief threat to our country."

We believe that civil liberties are the foundation of libertarian principles, and that one of the few legitimate purposes of government is to protect individual rights. Government has a duty to protect rights not because they grant rights to individuals, but because we have instructed them to in our Constitution's Bill of Rights.

Unfortunately government has throughout history failed to protect rights, and has attempted to redefine what rights are and has imposed restrictions on rights. In Massachusetts, government has restricted rights by requiring citizens obtain permission to exercise rights, and has violated rights by confiscating property without due process and by conducting searches and collecting data on citizens without warrants.

We support the repeal of all laws that prevent individuals from exercising their civil liberties and oppose any attempt to maintain or add to the existing laws that restrict rights. Libertarians believe that individuals have a right to be left alone to exercise their liberties and that government must not interfere with those rights without due process.

Libertarians believe that the equal rights of all people matter all the time. No exceptions.