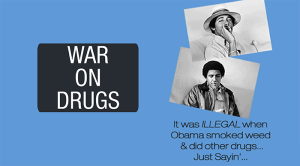 The Massachusetts Libertarian platform on the drug war is "The Commonwealth of Massachusetts cannot long endure a huge underclass of people whose civil liberties and civil rights have been lost to the war on drugs. There should be a general pardon of all persons who were convicted of violating state laws defining nonviolent drug crimes."

Prohibition doesn't work - America tried it in the early 1900's with alcohol and ended the experiment after realizing that it was a failing policy which didn't eliminate consumption or create a more moral society. It also created an organized criminal empire that controlled a black market to profit off the demand that existed. This prohibition should have been a lesson that banning things doesn't work, but instead has been the blueprint for the prohibition of drugs.

As the enforcement of alcohol bans ruined thousands of lives either by death or jail, so has the enforcement of drug bans. The war on drugs does little more than make criminals out of people who wish to consume something as someone would do with alcohol, and has resulted in people being thrown in jail and lives ruined. In addition to the criminal element that has grown - much like the gangsters of the 1920's - the war on drugs has resulted in an increasing amount of civil liberties being ignored as the government rushes to capture drug offenders and confiscate their property.

The libertarians of Massachusetts support the repeal of all laws that make the possession and use of drugs an illegal act, and support all measures that restore civil liberties that have been lost during the war on drugs. We demand a pardon and restoration of all rights to any person who has been convicted of nonviolent drug crimes. No victim, no crime!

Libertarians believe that the War on Drugs is ineffective, unfair, and immoral. We advocate ending it.

or
Please check your e-mail for a link to activate your account.