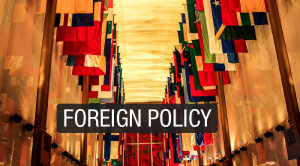 The Libertarian Association of Massachusetts's platform on foreign policy is “Libertarians support non-intervention in the affairs of foreign nations. Our foreign wars should end; our armed forces should be brought home from around the world. The Cold War is over; the vast military machine that the Cold War justified is no longer needed.”

One of the core principles of libertarians is the non aggression principle. This principle asserts that no one has a right to initiate violence against another unless it is in self-defense. Our military involvement in foreign wars has gone beyond any thin excuse of defense for 9-11 and is clearly engaged in strong-arming other countries into compliance with American demands.

The U.S. military has over 900 bases throughout the world and maintains a large military presence in allied countries. Our allies spend a fraction of their resources on military defense and instead rely on the American taxpayer to provide for their defense. We can’t continue playing the world’s police force to keep other countries safe. This role goes against our nation’s founders design and only results in resentment and blowback.

The libertarians of Massachusetts demand that the U.S. end its military involvement in foreign affairs, that we close foreign military bases, and that we bring troops stationed worldwide back home so that they can serve in their proper role of defense of our country.

Libertarians seek a United States at peace with the world.